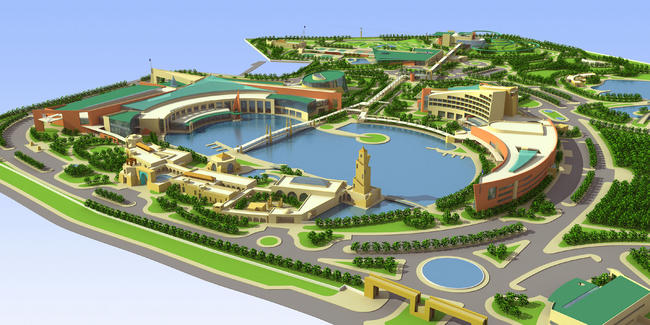 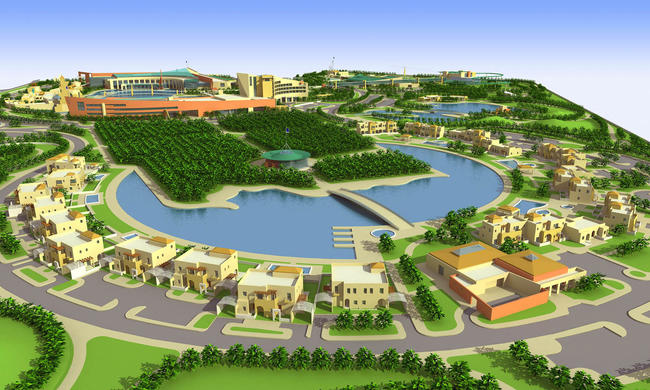 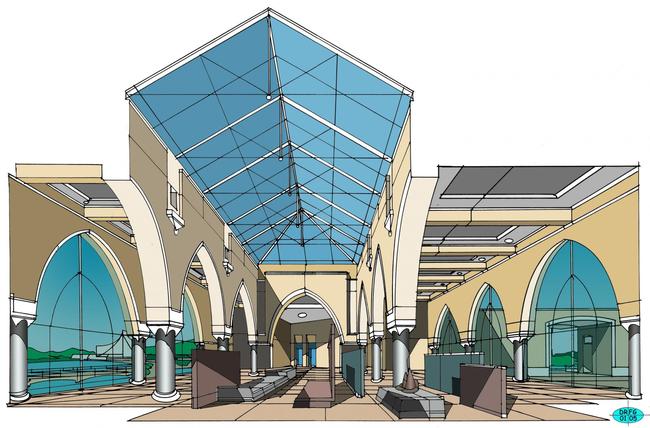 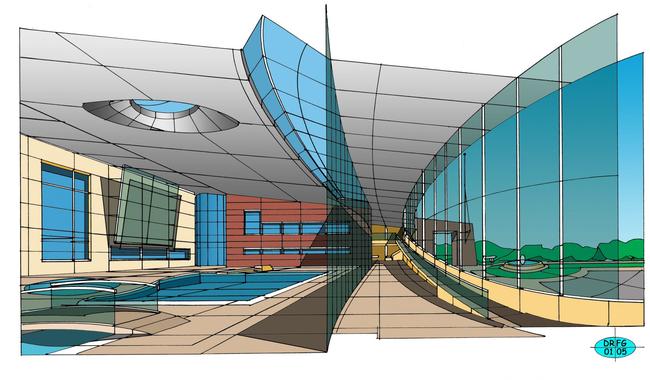 The site is situated in Riffa, Bahrain, a zone considered to be a tourist attraction and a historical place due to the Hunayniah-Spring and the surrounding areas where the existing fort on the closed East-Hill is the dominant feature.
It is well served by roads on the northern and western side and has a very good potential for the internal traffic system.
The large size, as well as the multiple functions of the program, needs a very strict disposition of the components to result as a clear and understandable zoning concept, integrated to the existing features.
The zoning system is composed of 9 distinct zones:
The Heritage Compound is close to the existing “Old Spring” on the northern border. This historical feature is included in a chain of low buildings, starting with the Museum and ending in the Handicraft Center and the traditional Souk, in a linear arrangement.
The Shopping Mall and Entertainment Facilities occupies the northeastern corner of the site and consists of retail spaces arranged around a central atrium following the triangular shape of the building.
The Main Resort Function includes the Hotel, the Multipurpose Hall and the Business Center, which are designed in a slightly rounded shape starting close to the Shopping Mall and ending at the beginning of the Heritage complex. These three zones have a high frequency of use and are consequently placed close to the municipal road with very good parking and service facilities. They are defined by a central lake, which is surrounded by buildings and pedestrian promenades.
The leisure facilities include the Health Club, Mini-golf and Horse-Riding with the stables and the paddock. The complex has good access due to the internal ring road and contains various indoor functions as well as outdoor sport fields.
The Cable Station and Pop Cart Slide is one of the park’s attractions. The Cable Station links the site with the prestigious historical fort on the East-Hill. A bridge connects the station with an access platform, which is placed towards the north of the Health Club.
The Residential Compound contains a series of chalets located behind the existing forest towards the west, in order to keep privacy. The units are organized in a concave way to overlook a second major lake.
The Luna Park and Go-Cart on the northwestern corner of the site being the noisiest activities are isolated form the rest of the development by a buffer zone consisting of artificial hills.
The Family Ecological Park is placed around a third water feature, the “Laguna”. Large picnic areas with bungalows and barbeques, as well as playgrounds for children and an open theatre, offers a peaceful and relaxing environment for families.
The Administration and Maintenance Complex is close to the main northern gate, in a strategic position for the security and control room.
The general landscape, which links all zones, buildings, and outdoor activities, follows a free, organic design, similar to a pathway created by people walking between different points of interest. Together with the border side walkway, the scheme of the park can be defined as a radius-concentric design, where all components are polarized around large water features.